Reuben Kataria has joined as General Manager of Four Seasons Hotel Bengaluru, which opened in the ‘Silicon Valley of India’ in May, 2019. Raised in Himachal Pradesh, Reuben graduated with a Hotel Management, Catering, and Nutrition 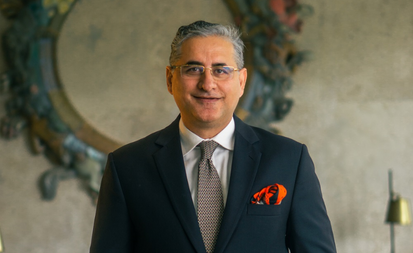 Reuben Kataria has joined as General Manager of Four Seasons Hotel Bengaluru, which opened in the ‘Silicon Valley of India’ in May, 2019.

Raised in Himachal Pradesh, Reuben graduated with a Hotel Management, Catering, and Nutrition diploma from IIHM C&T, Chandigarh, and went on to complete a senior management program at the Indian Institute of Management, Kolkata, one of the country’s prestigious business schools.

Drawing upon his quality education and close to three decades of hotel experience Reuben characterises his management style as approachable and guest centric.

Most recently associated with the high decibel launch of the Leela Hotel & Residences Bhartiya City as the opening General Manager, Reuben is excited to start his enriching innings with Four Seasons.

‘The Four Seasons brand is globally recognised as a frontrunner of luxury hotel experiences. Here, in Bengaluru the hotel is stunning in terms of design, look and feel. And, considering

that travel has resumed once again, I can’t wait for the magic to unfold across the board,’ he sums up.

Reuben started his career with Hyatt Hotels Corporation. In 2008, he joined The Oberoi Hotels & Resorts and garnered experience in various Food & Beverage positions prior to his promotion to Executive Assistant Manager at The Oberoi, New Delhi. In 2014, he assumed his first role as General Manager of The Oberoi Sahl Hasheesh in Egypt and two Luxury Nile Cruisers, Successive appointments brought him to Bengaluru where he oversaw the JW Marriott and, in 2020 he opened the Leela Bhartiya City, thereafter.

Having acquired a team of inspired Four Seasons employees, he is all revved up to take the hotel to new heights. ‘Big wins or small, everyone has a slice of success when the hotel is flourishing and guests have had a memorable time. I love the sense of community and how every person is here to enliven the hallmark Four Seasons style of unscripted service,’ says Reuben about his new team.

An avid photographer with a special interest in wildlife captures, Reuben is always on the lookout for an optimum ‘photographic frame’ and is a passionate social native. When he’s not enjoying his travels, one could find him savouring a good bottle of wine with friends and family.

As the world’s leading operator of luxury hotels, Four Seasons Hotels and Resorts currently manages 124 properties in 47 countries. Open since May 2019, in the information technology capital of India, Four Seasons Hotel Bengaluru at Embassy ONE provides a preferred address for both business and leisure travellers, and the highly personalized, anticipatory service that Four Seasons guests expect and value around the world. Designed to reflect a sense of its location, the Hotel’s design merges nature and architecture in an homage to Bengaluru’s reputation as the Garden City. Four Seasons Hotel Bengaluru at Embassy ONE is located in one of the city’s most dynamic development that includes Four Seasons Private Residences, premium grade office space, sophisticated retail, dining and entertainment.