Renaissance Ahmedabad is delighted to announce the appointment of Bikesh Sarkar as the new Specialty Chef for its recently re-opened Pan-Asian restaurant, Kuro. He is an ardent professional with 12 years of rich culinary experience. Bikesh, 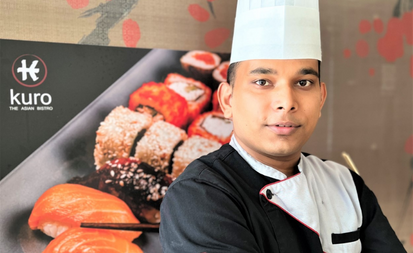 Renaissance Ahmedabad is delighted to announce the appointment of Bikesh Sarkar as the new Specialty Chef for its recently re-opened Pan-Asian restaurant, Kuro. He is an ardent professional with 12 years of rich culinary experience.

Bikesh, being the only son in his family, started his career in his early years and thus could not attain a hotel management degree. However, passion towards food came naturally to him and he took a decision to follow the same. He kept plugging away at his culinary skills and today, his journey from an apprentice to a sous chef at a premium lifestyle brand of Marriott International – Renaissance, is no less than an inspiration.

About 12 years ago, the Sous Chef kick started his career at a stand-alone Chinese restaurant in Bengaluru, where he learned the art of Asian cuisine. In 2013, his career path routed towards Hospitality sector by joining the Specialty Asian restaurant of a 5 star international hotel brand in Bengaluru. His career has taken him around India to diverse places like Maharashtra, Assam, Telangana and Tamil Nadu, where he worked with notable brands including IHG, TAJ and Marriott International. As Sarkar himself admits, travelling has influenced his culinary skills in a substantial way, allowing him to create exotic combinations that impart original and unique qualities to specialty food items.

During his stint at Westin Hyderabad, Bikesh had the opportunity to work alongside celebrated Chef Mahesh Padala, who has won Marriott International’s most coveted Award of Culinary Excellence (ACE) and has judged Master Chef Telugu 2021.

Sarkar truly believes that food should bring ultimate joy to the consumers, and that the creative approach to cooking creates a viable excuse to get together at the table. Today, Chef Bikesh delights the guests of Kuro – the Asian Bistro with his creative culinary perspective, and inspired flavors.