New Delhi, 29th September 2022 – Hyatt Regency Delhi is pleased to announce the appointment of Mr. Alessandro Sandrolini as the Executive Chef. With nearly 36 years of experience, Chef Sandrolini brings with himself a 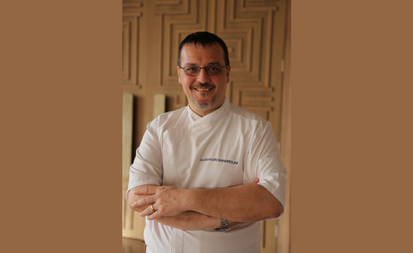 New Delhi, 29th September 2022 – Hyatt Regency Delhi is pleased to announce the appointment of Mr. Alessandro Sandrolini as the Executive Chef. With nearly 36 years of experience, Chef Sandrolini brings with himself a wealth of knowledge and passion for the culinary world. In his new role at the hotel, he would be responsible for managing overarching responsibilities in the kitchen, including catering and special event management, event set-up, order, and supply management along with food preparation and presentation.

A native of Bologna, Italy, Chef Sandrolini started off his career on a high note when he joined as a Commis to Sous Chef at Ristorante Silverio in 1986, a restaurant in Bologna that went onto earn a Michelin star in 1989. The chef developed a knack for great attention to detail when he took charge of his family restaurant, Ristorante da Angelo, where he managed all-round kitchen operations – right from planning, directing, controlling and co-coordinating activities of the entire staff to developing the menu, facilitating cost budgeting, training staff, and implementing new standards of quality and hygiene.

This would be his third innings with Hyatt Regency Delhi, as he has previously been a part of this flagship hotel and held the position of Executive Sous chef in 2019 and Italian chef back in 2013.

A conscientious and ambitious worker, Chef Sandrolini is dexterous in conceptualising and developing innovating menus, overseeing operations like staff scheduling, training, inventory control, financial management and motivating his team with his passion for culinary creativity.

Through his extensive experience over the years, the Chef has added multiple feathers to his hat. He has earned numerous awards and recognition for his culinary excellence and has also created exquisite menus for high-profile clientele.

Hyatt Regency Delhi is a luxurious business hotel conveniently located in the city’s central business district, 20 minutes from Indira Gandhi International Airport. Situated on the outer ring road, the hotel is near embassies, government offices and corporate headquarters in Delhi and Gurgaon. All 494 rooms and suites are equipped with modern amenities and offer panoramic views of the city and landscaped gardens. Enjoy dining and entertainment at the hotel’s award-winning restaurants: Café; The China Kitchen; La Piazza; Syrah, TK’s Oriental Grill; Polo Lounge and Sidewalk, the pastry shop.

Relax and rejuvenate at Club Olympus Spa, which offers numerous treatments to soothe and relieve. Additional leisure facilities available in the hotel premises include a state-of-the- art fitness centre and an outdoor swimming pool. The hotel also offers more than 2,955 sq m (32,050 sq. ft.) of meeting space with a combination of function, form and technology.